May 29, 2011, michaelbray Defending the Defenders,

This Judge may have sentenced himself to hell in refusing to show mercy to God’s faithful servants, co-defendants Dennis Malvasi and his wife Loretta Marra.

He just refused a plea agreement, which, as Buffalo News Staff Reporter Dan Herbeck reports (22 Aug.), was based on the fact that he didn’t coerce enough information out of Dennis and Loretta to help convict James Kopp. Arcara said, “I find that the public good would not be served by the acceptance of this plea agreement. Be prepared for the start of trial on Sept. 10.”

” Public good”! (Here is a “judge” who thinks it “good” to slaughter innocent children in the name of “women’s liberation.”

Judge Arcara thinks he has great cause to abuse these parents of two young boys; after all, they admit to helping this refugee and friend, the pursuit of whom was specious as the evidence (and lack thereof) even now suggests.

Whether or not husband and wife helped a righteous friend escape a government which was actively pursuing him who was charged with essentially rescuing innocent children from a murdering Abortionist Slepian, Judge Arcara has no cause for denying these defendants bail since March of 2001. This is nothing but hi-tech torture by “civilized” means. Loretta Marra was a nursing mother when she was swept up as vigorously as if she were an al Qaeda terrorist (the type of appellation bestowed upon all activist prolifers by the likes of NOWists and other carping wenches who hold the judge’s ear). 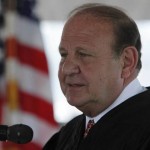 This is Arcara. He looks small. He is, when one imagines his place in God’s court where he will answer to The Judge of all the earth.

My smallest daughters, Nicea, 5 and Gethsemane, 3, were watching me compose what you are reading and wondered who this fellow was. I said he was a man who was going to hell.

“Really?” they observed in wonder.

“Yes. He helps the bad people kill their babies and he puts the good people in jail and is mean to them.”

The children were amazed. I rarely speculate and speak of particular people going to hell. But it is particularly evil to abuse children as this judge has done, keeping their mother in prison for 17 months (and counting) before trial to coerce “cooperation.” This is no wayward mother whose children are better without her.

You can admonish this dishonorable wretch at the following address.

In the absence of any justice from the powers who occupy places of authority, you may pray for their deaths, that we might have righteous, God-fearing men who respect the rule of LAW (God’s law) put in his place to give us justice in this land.

Another One Bites the Dust Bush Stumping